Customer Reviews
Yes we have received the reinforcing mesh and we are pretty happy with the quality. Many thanks! Chris

I have been ordering powder coated T 316 fly screen mesh from Qijie; unlike others, they never cut orders and always supply quality material to me.

I had very bad purchasing experience with the previous supplier, for they always postpone shipment time. To my excitement, Qijie is always punctual.

Since the First Gulf War the rapidly deployable wire mesh baskets have been deployed in arduous and remote locations creating simple perimeter walls to complex city-like fortification, defending personnel, equipment and critical assets of the US Army, UK MOD, USMC, USAF and NATO.

Recoverable MIL units are engineered to be deployed in exactly the same way as our standard products, however, with the removal of one pin, the fill material will flow freely from the cell and the units can be flat packed for transportation to a disposal site and recovered fully intact.

Easily and Rapidly constructed HESCO Bastion Concertainer create effective and economical protective structures. Originally designed to replace conventional field fortification materials such as sandbags, HESCO units were first used operationally by the British Army in the 1991 Gulf War. HESCO is now in service with many major military organisations including the UK MoD, ADF and the US Military and has become a benchmark in force protection throughout the world.

Whether used to define boundaries or as a preventative barrier, HESCO units have been employed to safeguard personnel, vehicles, equipment, facilities and other vulnerable target areas in a variety of military, peacekeeping, humanitarian and civilian operations. HESCO units have also been extensively used in civil applications in flood management, erosion control and slope stability applications.

HESCO walls can be built to any required length and to any height. The unique joining system allows the user great flexibility in configurations and requirements. One of the key advantages of the system is that any readily available infill material can be utilised. Sand, rubble, rocks, soil, concrete and even snow have been successfully used.

Rapid construction is another key feature of the product. A typical wall of HESCO Concertainer units equivalent to approximately 1500 sandbags, can be erected and filled by two men and a single common loader in less than twenty minutes. An equivalent wall constructed of sandbags would take 10 men 7 hours to build.

The flat-pack design of HESCO Concertainer units allows for extremely efficient storage and transportation. Folded units can be packaged on standard timber skids or pallets, in containers or as bulk cargo. Over 500m of Mil® 1 units can be transported in a single 20ft ISO container.

HESCO units are manufactured from welded mesh, either 8 gauge (4mm) or 6 gauge (5mm) and coated using the Galfan process. Each units is lined with ISO Standard 200g/m 2 non-woven polypropylene Geotextile.

The unique, patented design of HESCO units are available in nine different sizes, and in two colours (Sand or Green)] to suit different environments. 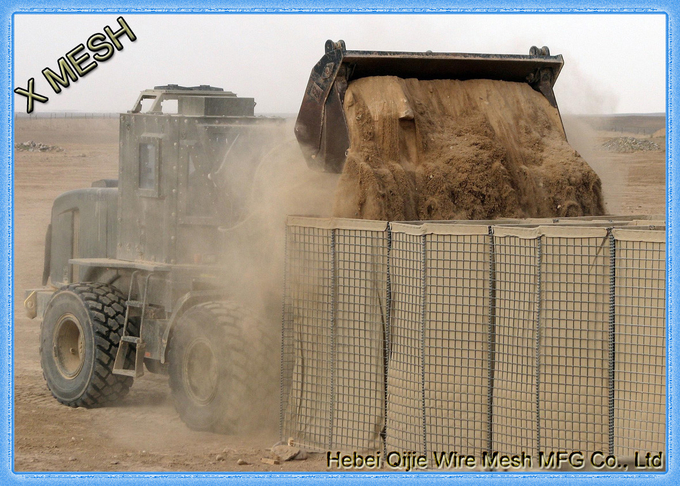